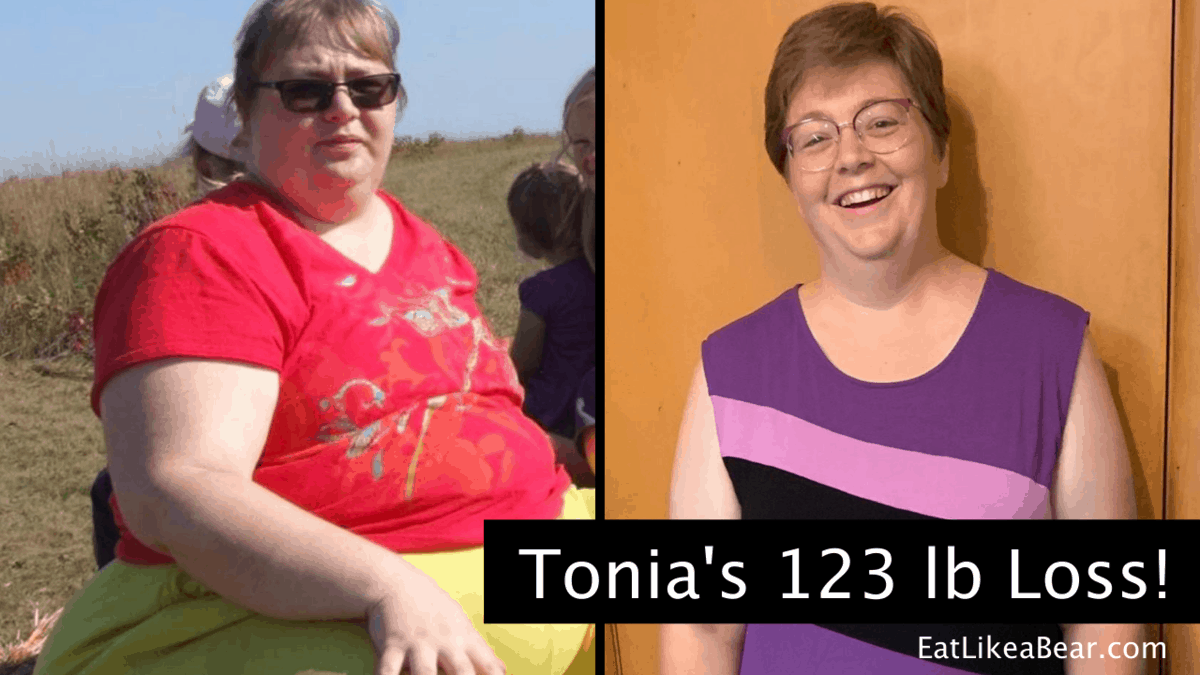 Tonia found us in September of 2019 and is down 123 pounds from her high weight as we post this update. Her husband is down 100 pounds as well. Tonia delighted the group with her fashion goal in the community’s fashion video. I will not mention the goal, but I’ll direct you to the 1 minute 40 second mark of that video.

Tonia has started a blog to document her process. You can follow it here: https://toniahaightwalker.blogspot.com/

My heaviest weight was 375 pounds. I had given up on ever losing weight because nothing I had tried had ever worked. I hated pictures of myself, so I always deleted the pictures that I wasn’t hidden behind someone in. In January of 2019, I quit eating pancakes and waffles, and I quit drinking Dr. Pepper unless I was on a trip and needed something to drink.

In June of 2019, I found a picture on Facebook that a friend of mine had taken and shared. I cried when I saw that picture. I knew that I had to find something that worked. So I started researching keto in general and found that there are many versions of keto, but the basic theme is low carbs.

I started playing with the idea of less carbs, but not fully committing to it yet, when someone recommended that I look up a Facebook group called “Eat Like A Bear.” I started reading all the free information on the site. The units were full of information. I read every story that came through my feed. The more I read, the more I thought that I could do it, but I had to take meds at least twice a day with food.

By then, it was the beginning of August. I had lost 15 pounds by just playing around with the idea of keto, and I left home on a work trip for 10 days. In those 10 days, I was not allowed to eat the way that I would prefer, and I gained 12 pounds.

On August 13th, I was back at home and realized that it was my cousin’s birthday. My cousin who had died four years earlier. I laid in a ball on my bed crying that day, remembering what I believe was the last conversation that I ever had with him. We had met at a gas station because we were going opposite directions. He had lost a lot of weight himself. He told me, “Tonia, you have to loss the weight. I don’t want to be here watching our grandchildren grow up without you.”

Well, by then I knew keto would work for me. So why not try Amanda Rose’s Eat Like A Bear way with a twist? I dropped from eating five times a day to three times a day, making one meal a day a Ridiculously Big Salad and stayed keto the rest of the time.

I knew that I would be doing this by myself because my husband wanted nothing to do with anything keto. He was going to drink his SlimFast shakes for breakfast and lunch, then eat whatever I fixed for supper. So I went to the store and got started. I researched supper ideas and did my best to come up with keto meals the whole family would like, and I had my ridiculously big salad for my lunch.

The weight started to melt off. By New Year’s Eve, just a bit over four months later, I had lost 75 pounds. I hit 300 on New Year’s Eve. I was very excited! Then I did a dumb mistake and ate a large danish for a celebration. It totally threw everything off.

The month of January, I dropped to two meals a day. I wasn’t hungry enough anymore to eat three times a day. Still, I didn’t lose a single pound the whole month. After losing 6 to 12 pounds in a two-week period, losing nothing for a month was discouraging. Also, I found some protein SlimFast shakes that my husband liked, so he decided to switch to keto as well. On January 19th, my husband helped me do my measurements.

Then, at the beginning of February, the scale started to move again. By February 10th, I lost five more pounds and we measured again. In that same time frame, I had lost 6.5 inches. 6.5 INCHES. How many inches would I have lost if I had measured at the beginning of everything in August? If you are starting now, please take my advice and measure now! I regret not measuring sooner.

How did I lose the weight?

My whole life I was told not to eat the fat-filled foods. “Eat the diet dressing for a salad.” “Don’t eat so much bacon. That much fat isn’t good for you.” “Black olives have too much fat in them. Don’t eat that many.” So I always tried to limit the grams of fat, and I kept gaining the weight.

I didn’t start off with one meal a day like some people do. Instead, I started by dropping to three meals a day. I had a breakfast of either almonds, eggs and sausage, or an omelet. Then, for lunch, I ate a Ridiculously Big Salad, and supper was a keto meal with my family.

As I progressed on this meal plan, I found that I wasn’t hungry in the morning, so I gradually ate later in the day. Soon, I no longer ate breakfast at all, eating just two meals a day instead. And I was able to cut my blood sugar medication and my high blood pressure medicine in half. Then I went down to one meal a day, three to four times a week. The other three to four days of the week, I ate two meals a day. Now I am one meal a day and adding a 48-hour fast to my week, but Sundays I still eat two meals a day.

I found out early on that I can’t do the same thing every day or my body will say, “Hey, I know what you’re doing!” And I won’t lose any weight, even though I should be. By mixing it up, my body doesn’t know what to expect, and I will continue to lose weight.

One year ago, sitting in a chair with arms on it was extremely painful and very embarrassing. I didn’t fit in any of them. I remember one time going to Olive Garden with my husband and some friends and having to stand and wait at the table until they could locate a chair without arms. My hips were so large that, if I attempted to sit in a chair with arms, it was sometimes so painful that I would end up with bruises on my hips.

Forget driving a car like a Prius. I would, yet again, have bruises where the seatbelt buckle was at. I am a huge supporter of my children and their activities, and sometimes this would make attending their functions very painful.

One such place is the theatre room at the local high school. In the past, under the leadership of the previous band director, all performances were held in the gym. It had bench seats and no backs on the seats. When the new band director showed up, he changed all the performances to the theatre room. I went from enjoying the event to “I have to sit in this row, in this section, and on the edge of my seat the whole time.” And I would be praying that the seat wouldn’t break while I was sitting in it. (I have seen one break with someone else who was smaller than I was, and I would have cried with humiliation if that happened.)

Then I started on this Eat Like A Bear keto journey.

Only NINE WEEKS into it, I went to a meeting that was in the high school theatre. I went to my normal row and sat down, not even thinking about it. I sat there and realized that I had actually sat IN the seat – not on the edge. It was also no longer hurting to sit there. Yes, the bars on the side were still touching my legs, but there was no more pain, and I wasn’t bruised the next morning. I was sooooo excited that I told my son to take my picture, and I was grinning from ear to ear.

Fast forward eight months later. My husband and I stopped at a local place of business, and they have some seats for people who are patiently waiting on their order. I sat in the seat and was, yet again, overwhelmed at the changes my body had made.

This time, my legs barely touched the bars. There was no way that I would end up in pain – at all. I even had a bit of wiggle room. I know that I still have a ways to go, but Eating Like a Bear has changed my life, and I will never go back to where I was before. Thanks to Amanda Rose and the amazing people on the Eat Like A Bear Facebook page, it is simple and easy.

One year ago, I couldn’t lay on my back for more than a few minutes. I would get stuck and my husband would have to help me roll to my side so that I could get up. Now I can sleep on my back for hours at a time and roll over by myself.

One year ago, I always lead with my left foot when walking down stairs. Now I can walk down them alternating like a normal person.

One thing that I recommend to anyone who is just getting started is to measure yourself. I do it like I was taught at Curves: the bicep, bust, I added the bra line, then waist, hips, and thigh. If I would have done it sooner, maybe January wouldn’t have been so discouraging.

I am enjoying my journey. If you have any questions, you can find me at https://toniahaightwalker.blogspot.com/