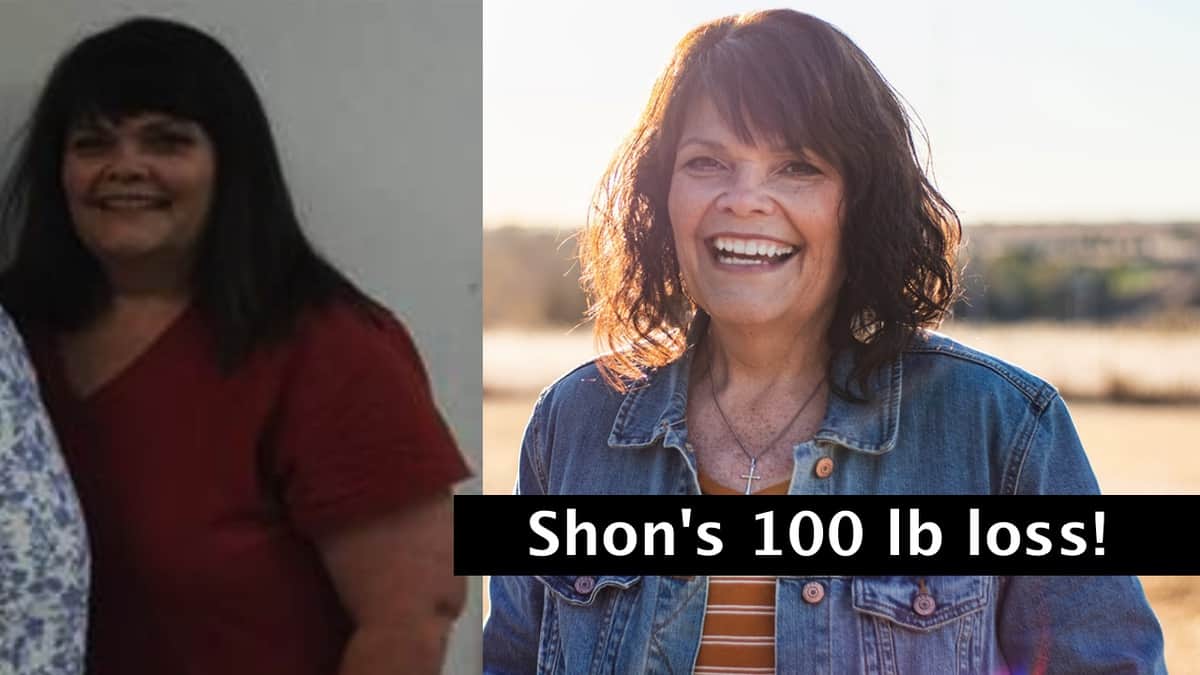 Shon has graced the Eat Like a Bear community for over a year now and we saw her shrink before our eyes, a triple-digit transformation. In the process she has delighted us with photos of herself, looking very happy. I always think of her in this first picture, and this is when she was down just 45 pounds. I asked her to reflect on her year for us.

Q: What was your core motivation in losing weight this time? Did you have other weight-related problems you needed to solve?

A: “Wow. I wish I could say that I HAD a core motivator. Maybe it was a combination of many things. Health wise, I knew I was headed toward a multitude of health issues if I continued on at 242 pounds. Diabetes, heart disease, arthritis and chronic joint pain. Hated my lack of stamina. So many things I had been able to do in the past—even at this approximate same weight—I could no longer do as I aged—57 at the time. What would “golden” years look like if I didn’t make a change? Would I even live long enough to reach the age considered to be ‘golden?’”

Q: What sorts of frustrations did you have in the past trying to lose weight?

A: “I had previously lost 60+ pounds, twice. Once in 1996 and once in 2011. The first time was low fat, high carb eating. Calorie counting. And very aggressive exercise. I walked 4.5 miles EVERY day plus weight lifting 2-3 days a week. And I was 35 at the time. I went from 232 pounds to 169 pounds. Then my walking partner moved. I injured my heel and couldn’t walk. Etc. etc. The weight came back. A chunk at a time. I had hit my highest weight ever in 2010. 255 pounds. I had a total hysterectomy that year. Feeling better, I decided it was time to make changes. 2011 I was turning 50. I started low carb with moderate exercise. By October I was at 191 pounds and spent my 50th birthday in Africa on a mission trip. I was so pleased with my accomplishment. But within weeks of my return home, old habits were creeping back. And the pounds quickly followed. I had NO FRAMEWORK. I had NO PLAN. I had NO UNDERSTANDING of IF (intermittent fasting).”

Q: What made you try the Eat Like a Bear approach?

A: “When someone tells you that you can lose over 100 pounds just by eating salad once a day AND you don’t have to buy anything from her to do it!!—well that gets MY attention! In a year, she says??! What?! Really?? Ok! I’m hooked!!”

Q: Describe for us what you ate and when you ate to lose the weight.

A: “My story with ELAB (Eat Like a Bear) started January 1, 2019. So when I got up that morning, I looked to see what I had on hand that would work for a keto meal, sans salad. I had no greens on hand. I believe my first meal, at noon that day, was an egg and cheese omelette. As the days progressed and I shopped I started my salad. And I put everything in but the kitchen sink. Greens, onion, avocado, eggs, meat, nuts, berries, olives, cheese. So my choice for time was to be noon. OMAD (one meal a day). But oddly enough, I couldn’t eat enough at one sitting. So for about 2-3 weeks, I did a huge salad at lunch, then finished my calorie intake early evening/late afternoon. I did count calories. I did count carbs. 1000-1200 calories and approximately 20 net carbs. I did my best to follow what Amanda advises. Why would I do it any differently?? I was here because of HER success after all. Within 3 weeks I was able to do OMAD for my lunch. And from January through the middle of October 2019, that’s what I did 90% of the time. This was my most intensive weight loss phase. There were the rare exceptions for vacation or special occasions when my plan for the day changed. But when you ELAB, you know that you go back to “what brung you here” the next day! I also did cooked meals of cabbage, onion, Brussels sprouts, etc with salmon, roast, chicken etc. Mix it up! No need for boredom with this WOE (way of eating)!!”

Q: As you implemented the Eat Like a Bear approach, how was it different from your past diet experiences?

A: “For one thing, I was losing weight faster than I had ever done previously. And I wasn’t having to exercise to do it. That was great because physically, there was no way I could exercise as I had in the past. It was a ‘win, win!’”

Q: Take us to the moment when you realized the Eat Like a Bear approach was actually working for you

A: “The first week. The swelling, insulin surges, sugar cravings all diminished or completely disappeared. I knew immediately that this WOE was something different.”

Q: Tell us about some of the things you can do now that you could not do with the extra pounds.

A: “This could literally fill a book! Sit in the bathtub and my thighs not touch the sides. Sit on the couch with my legs curled under me. Sit with my legs crossed UNDER a table for as long as I want. Walk 3 miles without a huff or a puff one. Fit into an amusement park FROG ride with my 3 year old granddaughter. Wear skinny jeans. Sit at any booth in any restaurant and not worry about having to squeeze in. Climb in the passenger door of my car and crawl over the console into the drivers seat. Stand in my kitchen cooking all day without back or leg pain. And the list goes on and on and on……. “

Q: What is the top tip you would give someone just getting started?

A: “Do. It. Do not allow for excuses. Do not keep saying tomorrow. Do not over think it. It’s not hard. Don’t make it that way. There’s not that much to figure out. The only thing you need to decide, is that you have decided to do it. When you make that choice, everything else will come.
Do you want it?
Can you envision it? Even a faint glimmer?
Then grab onto that glimmer and do the thing!!”