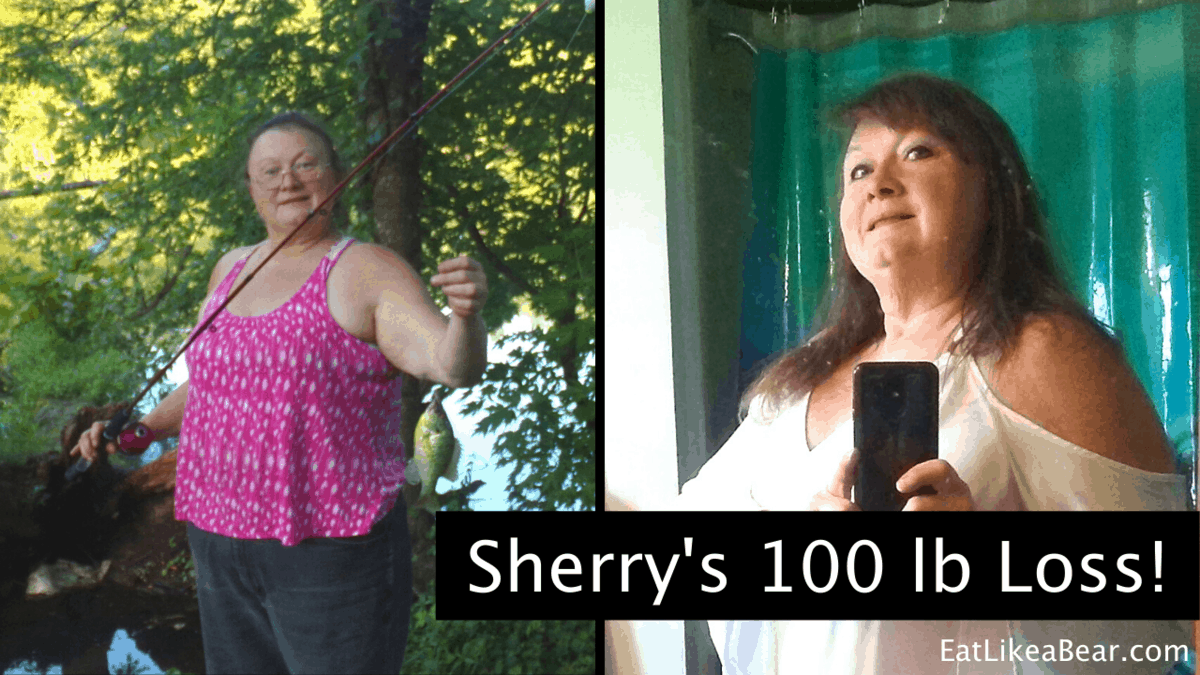 It’s amazing to think that Sherry McMurray has only been in the Bear group for a year because she has become an institution in itself with her eye-popping transformation photos and the heart she shares with the group. Sherry has overcome multiple health problems and has dropped 100 pounds. This is Sherry’s story.

‪When I hit 289 pounds, it was like I woke up, like someone snapped their fingers and a light bulb came on. I’m not sure what it was, but I knew I did not want to lose my feet. My A1C was 9.9. All my doctors would talk about was insulin. My cholesterol was high. I honestly don’t remember the numbers, but all the doctors would talk about were statins. I would refuse, and they would get mad.‬

‪One night I was on Facebook, and a person I knew posted a before and after picture. I was amazed at the weight that he had lost. I messaged him and asked him what he was doing to lose weight. He replied, “Keto.”

That began my internet search. I would spend hours online after work reading about the keto lifestyle. In June, I came across Amanda Rose’s Yellowstone video.‬
‪
That was the night my life changed. I may not have realized it at the time, but that was the night.

Here was this woman offering me everything and asking for nothing in return. I guess you could say I cyberstalked her. I searched for her name, read everything I could find that she wrote and watched every video I could find. I pulled up Facebook and joined her Eat like a Bear group.

I was ecstatic that it seemed I had found something that not only worked but might work for me!‬

I have tried so many diets in the past: Weight Watchers, SlimFast, Atkins, South Beach, boiled eggs and bananas, low carb, Phentermine, fen-phen, and the list goes on.

The only thing I didn’t try was surgery. Weight loss surgery is the only thing I never considered. None of these diets worked for me. Yes, I would lose a few pounds. But then I’d lose interest and gain everything I lost back, plus more.‬

‪Desperation, that’s what fueled me. I desperately wanted to get healthy. There were days I hurt so bad. It was all I could do to walk to the end of the yard, I guess around 40 feet. I hobbled; I didn’t walk. That’s how bad the pain was.

I even had a walker that I could use when needed. If I had a walker in my early 50s, where was I going to be by the time I was in my 60s? Would I see my grandchildren grown and married? Would I ever see a great-grandchild? Desperation, that’s what fueled me.‬

I ate a large salad with 6 to 8 ounces of meat, skipped all root vegetables and used ranch dressing at that time. I did a lot of label reading on salad dressing and found that ranch had the lowest of everything, so that was my go-to when I first started. (Now I use Amanda’s recipes and make my own.) I ate every day, but only once a day, and I kept to a one-hour eating window.‬

‪I guess it was around a month in that I began to see the changes in my body. My face looked slimmer, and my clothes were getting looser. I was amazed that I hadn’t lost interest, and I looked forward to my Ridiculously Big Salad every day. This added fuel to the fire and pushed me on.

I took pictures, probably more than I needed to, but comparing them is how I could really see what my body was doing, how it was changing. I had found something that worked! I had found something that I could actually stick to! So I continued to take pictures. I had some that were only for my eyes, but I have since shared them with the group because I want others to see and be encouraged, to know that they can do this too!‬

‪Today I weigh 189 and am 100 pounds down. I wear a size 13 in pants, sometimes 12s. I am wearing a medium shirt. I have never worn a medium shirt in my life, as a teenager or an adult! ‬

Today, I hike to the tops of mountains pain-free! Today, I am off all medications! In fact, my doctor told me at my last check-up to continue what I was doing because it worked. Most of all, today I don’t worry about losing my feet! My blood sugar has gone from the 300+ range to the 65 to 90 range. ‬

‪Start today and take pictures. Pictures are amazing with this way of life.

‪You can do this – I am proof. Today I am actually living life, thanks to Amanda Rose. ❤️‬