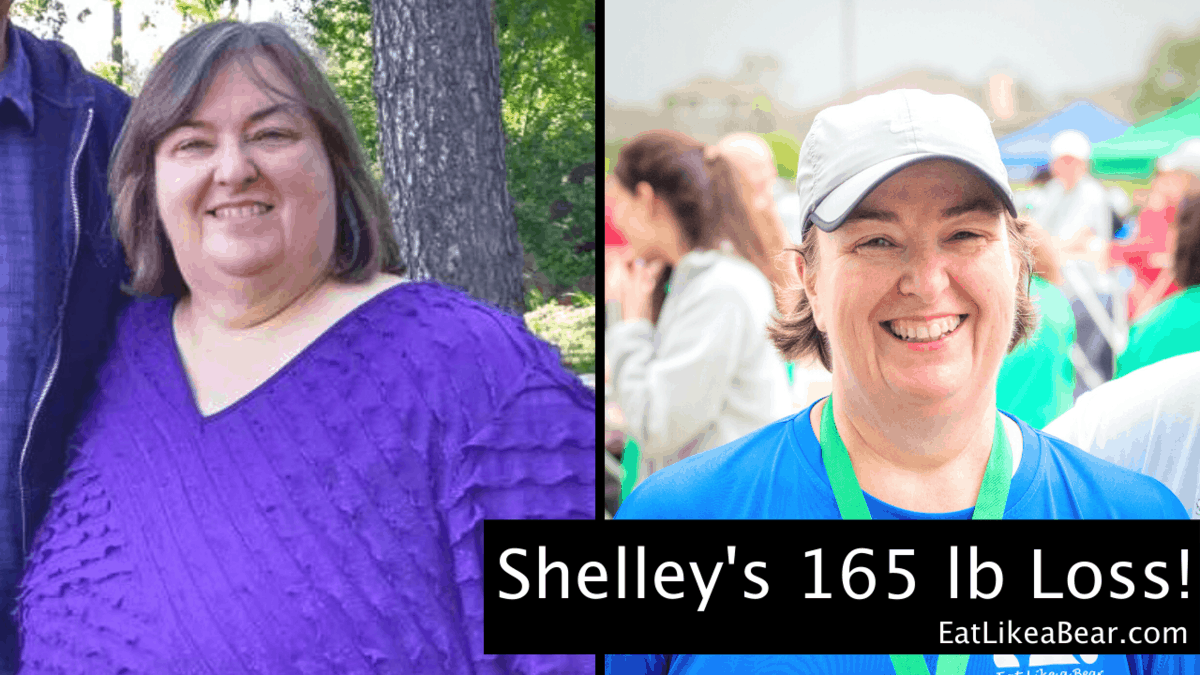 Shelley joined on the first day of the Eat Like a Bear community (July 9, 2018), and nine months later, she was the first official Century Case in the group — down 100 pounds (a record challenged by an anonymous group member who will not come out of lurkdom for verification).

From a starting point of walking with difficulty the short distance to her mailbox, Shelley celebrated her 100-pound loss by walking in a 5K. A year later she walked eight miles at half her size, down 165 from 330, on Father’s Day in honor of her father and husband. This is Shelley’s weight loss success story.

Shelley’s Motivation and Past Diets

My motivation to lose weight was because I was 330 pounds, severely depressed, weary, and defeated. I had given up on ever improving my health. I was diagnosed with high blood pressure (four meds), asthma (two meds), chronic joint pain (two meds), anxiety (one med), and limited mobility.

In the past when I’ve tried to lose weight, I was frustrated because, although small losses were attainable, they weren’t sustainable. And I was frustrated with the lack of knowledge, tools, and support.

But Amanda’s story offered a glimmer of hope. I was at the point of “give up” or “get up”. And I chose to get up — I decided I wanted to live. I heard Amanda’s story and believed her when she said that I could do it! Her story instantly resonated with me.

I started out strict, eating under 20 net carbs in three meals, with an eight-hour eating window. Then, I gradually reduced to two meals per day during a four-hour eating window, then to one meal a day. I ate a ridiculously big salad three to four days a week. On the other days, I’d have omelets or protein with cooked veggies.

The Eat Like a Bear approach is different from past diets because the quick results were highly motivating. It wasn’t complicated, and there was great support in the Bear community.

I was convinced this way of eating worked after week one, when my joint pain greatly diminished and I dropped 10.5 pounds. The inflammation reduction was immediately noticed in how my clothes fit. And the swelling in my feet and ankles was almost nonexistent.

Now that I’ve lost weight, I can walk, jog, tie my own shoes, trim my toenails, pick up dropped things, get out of my chair, sit on the floor, fit in theater seats, do intermittent fasting and extended fasting, pass up sweets, look people in the eye, not avoid mirrors/cameras, etc.

For me, the smile now sports a much deeper dimension… rooted in reformed health and revised life goals! Those things which were off limits due to my former obesity are now adventures on my goal list! Ain’t life grand?!?! #godbearsandbootstraps #learningtothriveathalfmysize #shelldonelostit #we.are.eatlikeabear

My top tip for people who are new to the Bear community is to believe you can do it and trust the process.