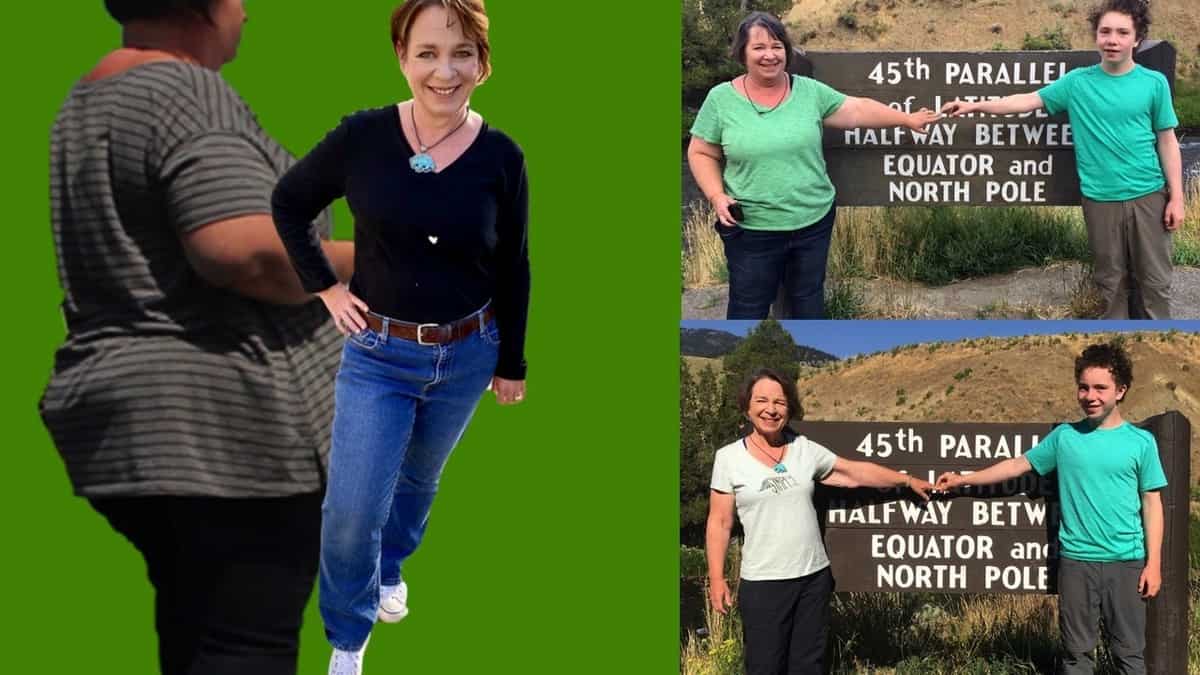 Maybe you’ve seen the intermittent fasting “before and after” photos scattered across social media, but I’ve tried to collect some of them here in one place. The bottom line is that I have lost 150 pounds with intermittent fasting and a keto diet. For the better part of a year, I ate no more than one meal a day in an hour a day and my food was very low in carbohydrates (keto even).

I ate a lot of food in that hour, inspiring the name of this website, but I was strict in eating only low carb/keto and in keeping my eating limited to one hour a day. There may have been a few days where my eating was interrupted and my eating window stretched to an entire 90 minutes or so, but you get the idea. This eating approach was extremely effective for me, as is clear in these intermittent fasting before and after photos.

The Yellowstone photos first appeared on Instagram and in the video “Hope” on Facebook. This video took me several weeks to get the courage to make and the message still makes me very emotional, so you will just need to watch it and you will see why.

Frederick and I stood at the 45th parallel sign in northern Yellowstone National Park in August of 2017, just after we viewed the total solar eclipse in Douglas, Wyoming. Frederick is a geology hound and was captivated by the 45th parallel — the mid-way point between the Equator and the North Pole. Excitement is contagious and so I jumped in and grabbed a picture with him. There aren’t many pictures of my “before” self but this is a premium one. 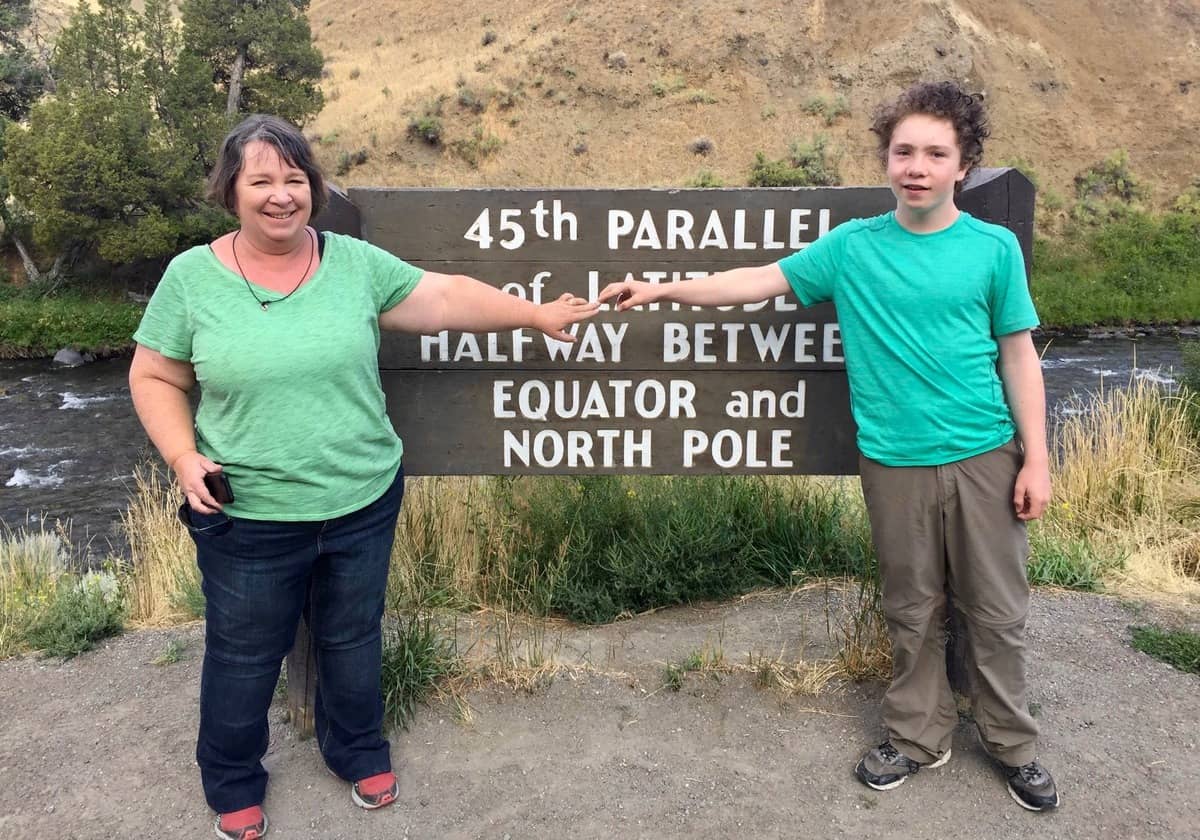 On the drive through Yellowstone, a tourist offered to take this family picture at Dragon’s Breath. Dragon’s Breath is a really cool volcanic feature in Yellowstone with a cave of hot bubbling sulfur-stinky liquid, all of which catches the sound waves just right. It sounds like a dragon is tucked back in that cave, roaring. It’s pretty awesome. At this point in the trip, we were on our way home and I was gearing up my brain to launch a strict diet. I planned to start on September 1. We got home a day or two earlier and I thought, “What the heck?” I started on August 31. I started with a water fast but went most of the year on a low carb/keto diet (the heavy vegetable version of keto), one meal a day (OMAD) in one hour. The “after” photo is from August of 2018.

I talk about my views on the keto diet, why it’s important: Keto diet for weight loss. There are big drag-down internet fights about what “keto” means and then caricatures of it (e.g. it’s just a bacon and sausage diet), fights I don’t spend energy on. Long game victories will come from: 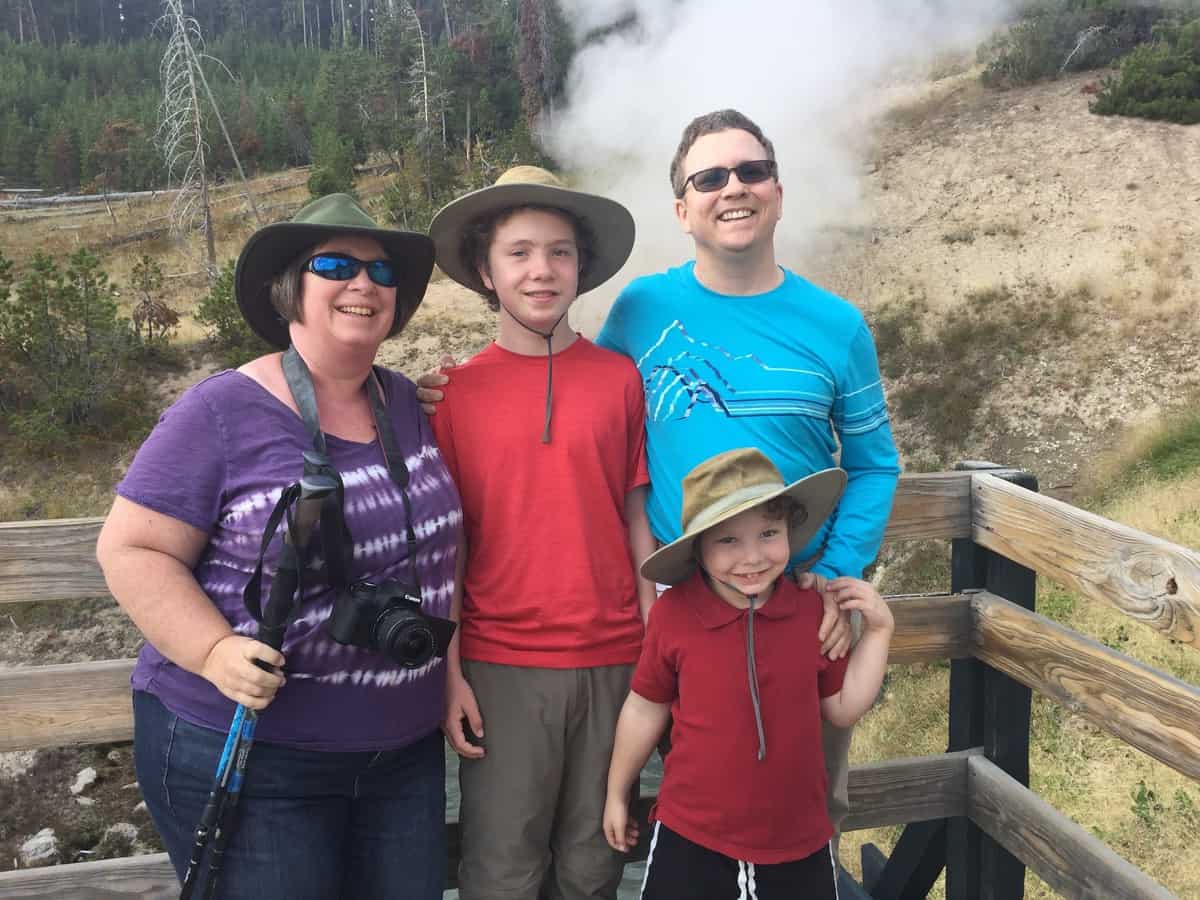 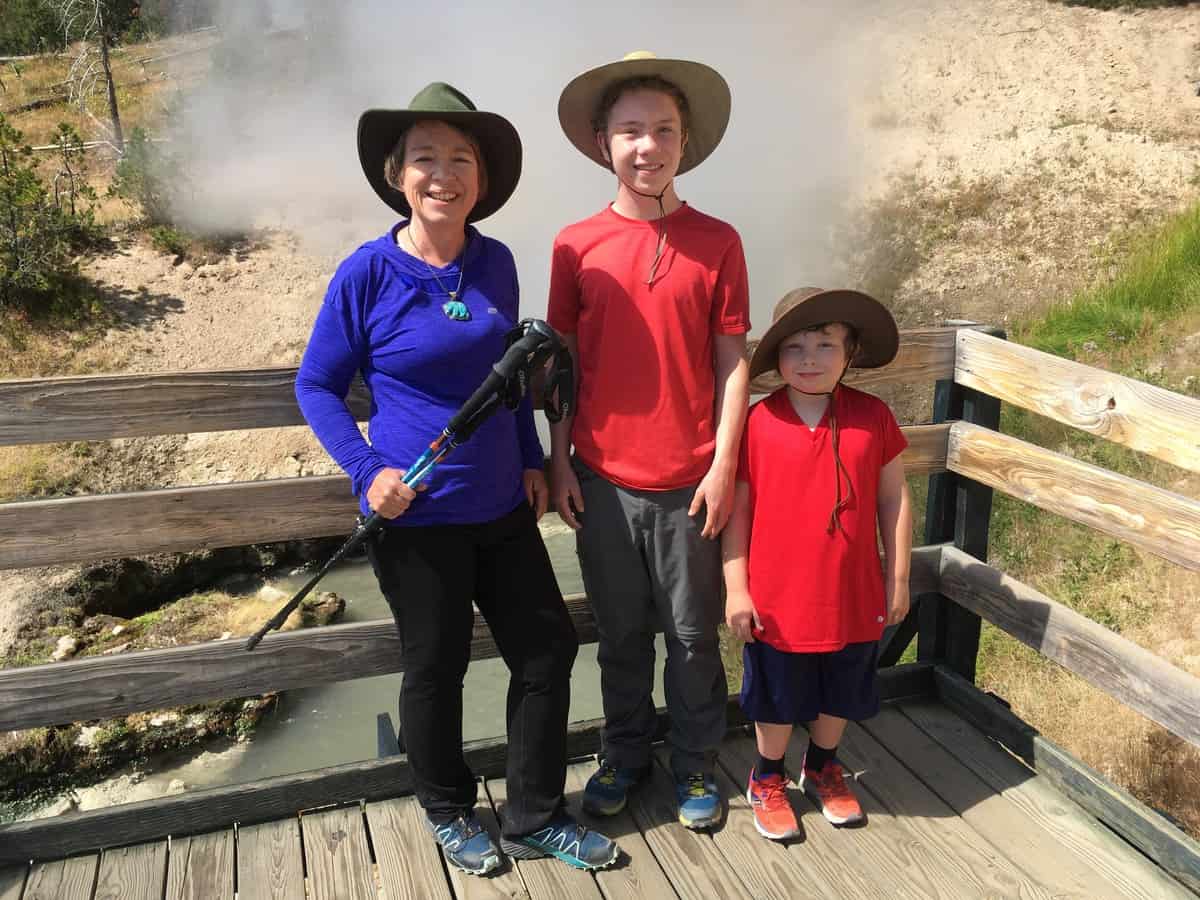 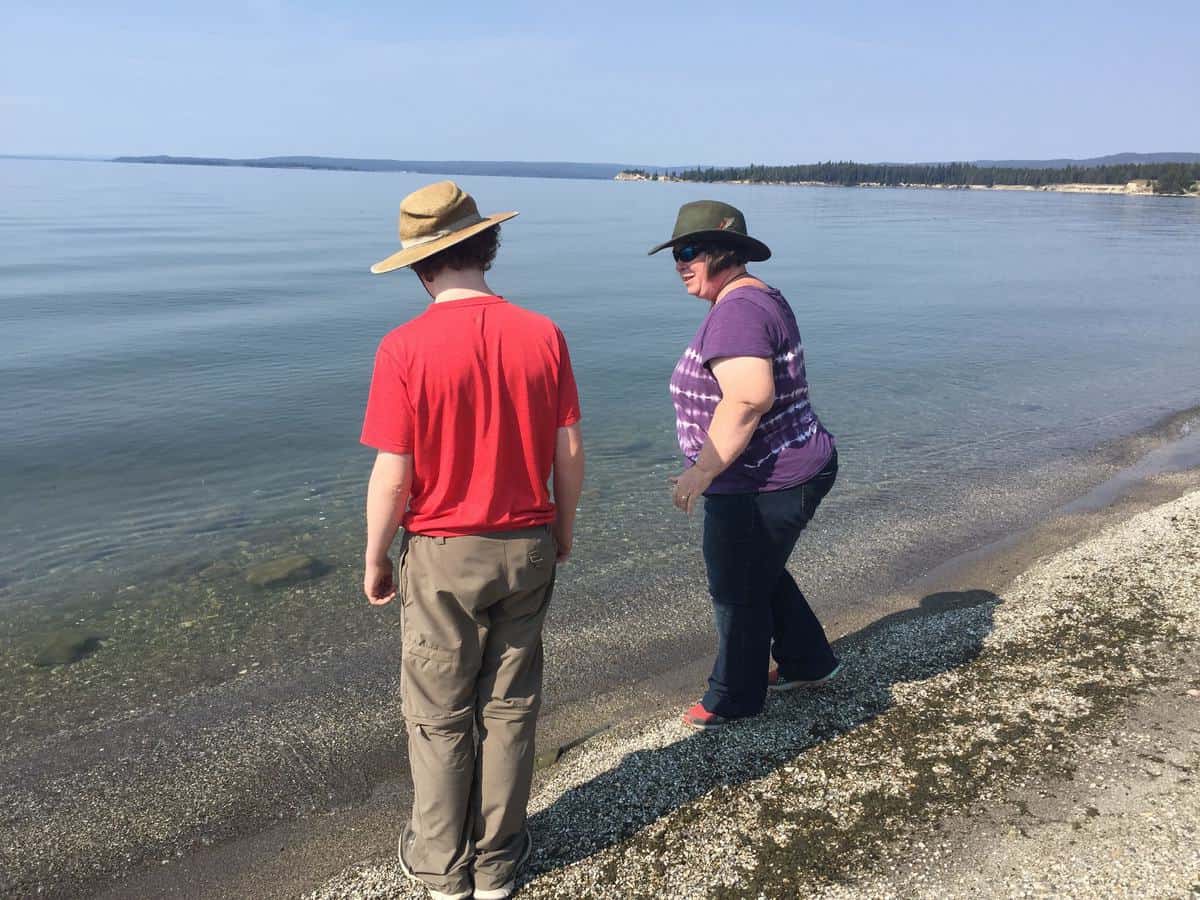 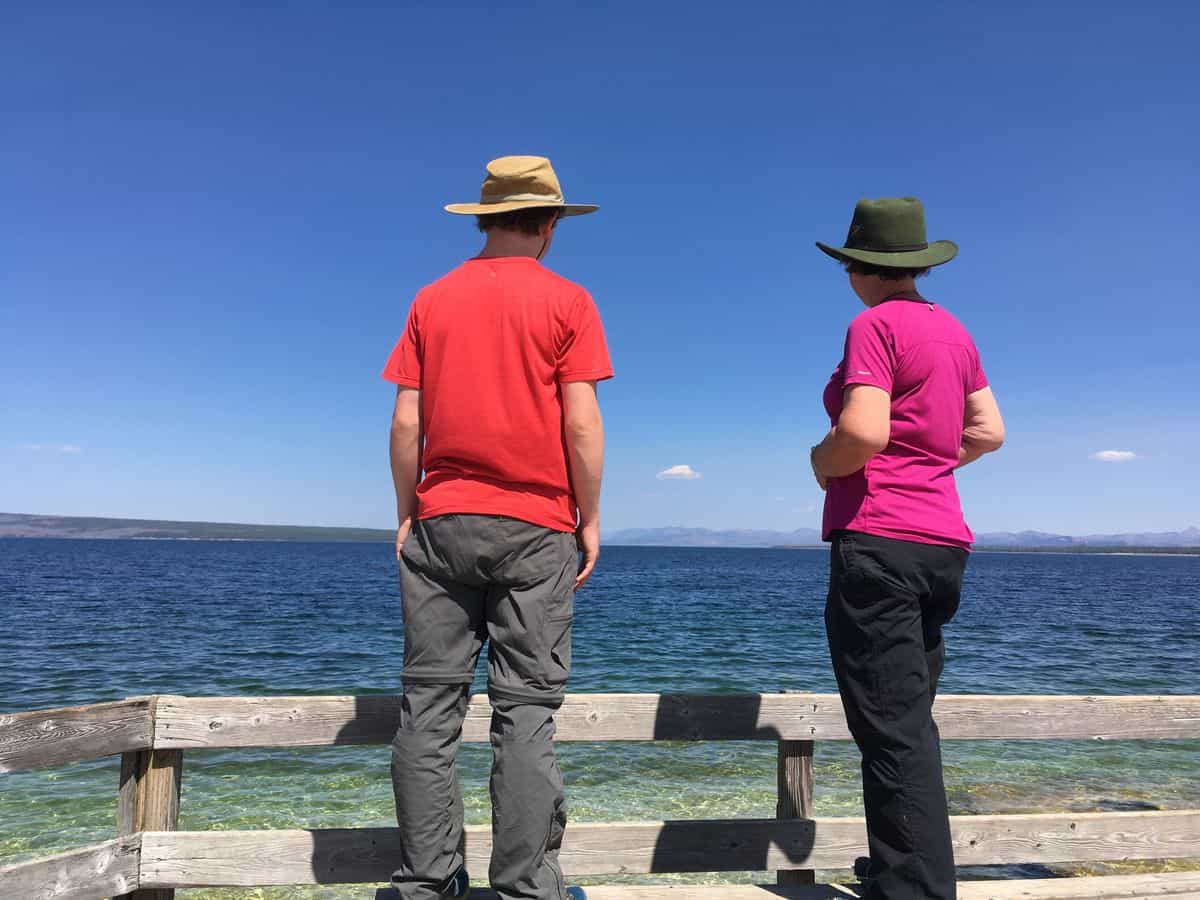 Here’s the 120-pound before/after video. We obviously need a new one. The boys in these videos are growing and so who knows what the potential is. Frederick weighed in this morning at 134 pounds, so I’ve obviously lost a Frederick again. He’s working out and building muscle. Maybe we should toss a ripped 150-pound version of him on my back. Ha ha! Goals for both of us!

The “Big Shirt” Monument to Intermittent Fasting Before and After

My friend Amber challenged me to do this “big shirt”/”big pants” series. I think it’s a great idea but knew I’d feel a little bit stupid out there on a trail waving around a big shirt. I hadn’t appreciated how emotional it might also be, especially looking at the photos themselves.

(I dedicate this post to the ladies in the purple shirts.) I call this one, “Yes, I can!” and it blows my mind. I am holding a shirt, my own shirt from a year ago, looking out at the #GoldenTroutWilderness from the lookout tower at Jordan Peak here in the southern #sierra. Holding the shirt (and seeing the photo) almost blows my mind but the real mind-blowing moment happened on the drive from the lookout tower. If you’ve followed my #weightloss story, you know my motivation to lose weight came out of desperation to hike with my son. He was 15, now 16, about to fly out of my nest, and I was limping around driving him to trailheads when I wanted nothing more than to hike with him. We live in the Giant Sequoia National Monument, adjacent to the Golden Trout Wilderness and home to a prized destination on Frederick’s list: Maggie and Summit Lakes. It is 9 miles in. Maggie Lakes makes a great base camp to hike to Summit Lakes. I know now that with the weight loss I can get to Summit Lakes with him. We will do it. This is exciting, to be sure, but it is just background on the mind-blowing moment. We stopped by the pack station above Quaking Aspen to ask about mule support to Maggie and met Greg and Johnny. (If my 9-year-old is going with us, we need supply help.) As we spoke, I thought to ask, “We keep talking about Maggie Lakes, but are we missing something obvious? What is the best destination up here?” “Coyote Lakes!” Greg said, “But you need to ride up. The last ascent is quite steep. If you don’t have riding experience, you’ll be in a world of hurt, so you need to be prepared.” Frederick and I looked at each other, thinking the same thing: Thigh burn is far better than rump burn. If a horse could walk in, so could we. I came home and looked through my photos, thinking carefully about Maggie, Summit, and Coyote Lakes. Coyote Lakes??!!?! Coyote Lakes is deep in the Golden Trout Wilderness, offering expansive views of the southern Sierra, a location few people will ever see. It is remote and requires real physical condition, time, and determination. It is exactly the kind of hike I have never, ever in my life considered doing, until this moment. 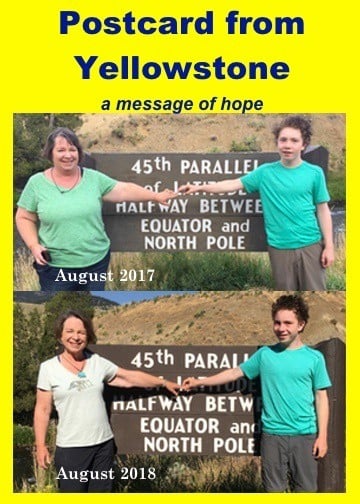