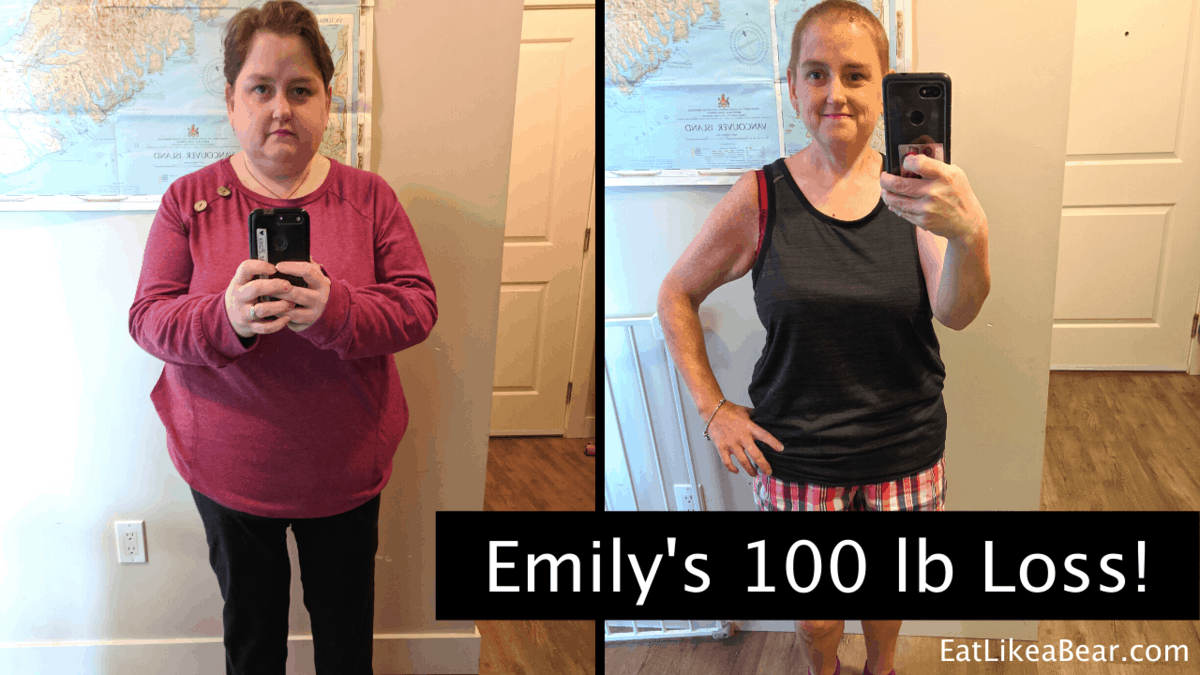 Emily joined the Bears in late 2019 and was pretty quiet and took me by surprise with her ability to grind. She’s down over 100 pounds and is looking for 110 total to join the small but growing class of “half my size” cases at Eat Like a Bear. Emily shares her weight loss success story with us here.

Emily’s Motivation and Past Diets

Losing weight was never easy. I have been obese my entire life and would never stick to any plan before this for more than a couple of weeks. I would start out all gung-ho with the best of intentions and then just run out of willpower because everything was so restrictive.

But keto and intermittent fasting are so different. I get to eat such delicious foods that I never felt deprived. Especially after I became fat-adapted, I was even less hungry than I have ever been before. I still feel guilty for losing so much weight while eating so good. Haha.

I first decided to try the Eat Like a Bear way of eating precisely because it was so far out and different than any other diets I had tried before, and I was more curious than anything to see what would happen. It worked so well, so fast that I was blown away and it gave me the motivation to keep going.

I started out eating two meals a day in an 8-hour window, but then soon switched to a 6-hour window and then to one meal a day once I felt comfortable. It really wasn’t difficult at all once that pesky ghrelin (hunger hormone) got the idea that I wasn’t eating at the “normal times.” Eating one meal a day made eating more enjoyable as well because I would really look forward to my one meal for the day.

I would mix up what I ate, though, which did include a lot of salads, but I grow tired of the same thing. I normally eat a protein, like grilled chicken or sausage, alongside low-carb veggies such as asparagus or broccoli. Sometimes I would make a keto-friendly casserole or even a fathead dough pizza.

I realized that the Eat Like a Bear way of eating actually worked within the first week or two, and I was completely floored because nothing else I had tried—be it South Beach, Weight Watchers, or straight calorie restriction—had worked. I realize that they didn’t work because I didn’t stick to them.

Eat Like a Bear is so much easier to stick with because the initial loss gave me the motivation and, more importantly, hope that I needed to make this eating plan a lifestyle.

Probably the most important tip that I would have for a beginner is to stay consistent. There will be stalls and even gains along the way, but your body prioritizes what it needs to heal first, and it may not reflect on the scale right away. Stick with it, and you will see progress.