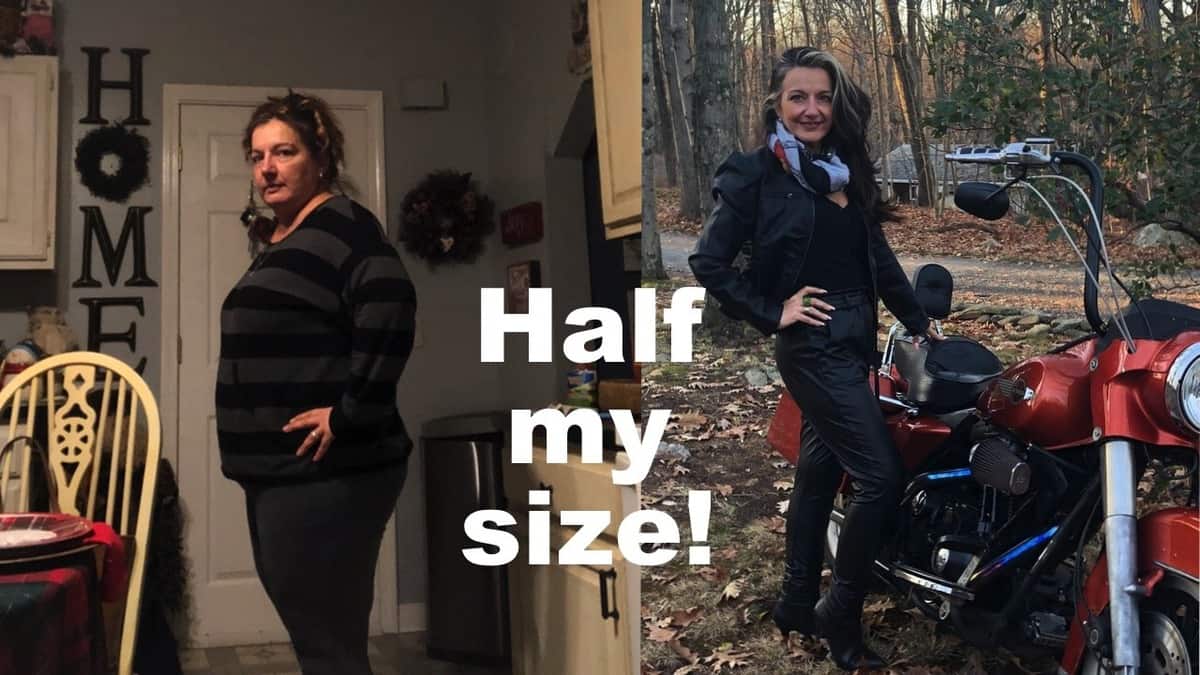 If you’ve been in the Eat Like a Bear community, you surely have not missed Maria who posts weekly (or more) progress photos of herself, dating back to when she first started in January 2019. She was the first community member to break my record for losing 100 pounds (mine was in 8 months, hers in 7 months). She posts regular photos on the improvement in her skin, which by all rights should be a giant wrinkle sack and yet is looking down-right fabulous. Follow her in the Eat Like a Bear group (here) but also on Instagram (here) and her own Facebook page (here) for the play-by-play. In this post, however, she takes us back to where it all began. Below are her words:

Today, I want to talk to you about Cheat days and how unimportant/important they truly are. When starting this journey on 1/14/19 most of you know I stood in front of the bathroom mirror and had a heart to heart with myself. A conversation I needed to have with the person who needed me the most. Yes, after a 3 day fast I jumped on the scale on the 14th and started this WOE (way of eating) never looking back. Would I reach my goal of 150-155? Yes, eventually! Could I give up everything I loved (food)? Yes Did I have a time limit for my goal? No Once I reach my goal would I go back to my old ways? No Would I succeed in this journey? Yes, I have too! What did I fear the most? What I feared the most was… ME Crazy right??!! No, not at all. I feared myself the most because I feared that I didn’t LOVE myself enough to make it through. I feared I would sabotage myself! I feared I believed all the lies I had been told all my adult life. I feared myself so much that everyday I stood in front of that mirror and spoke to myself as my best friend! I spoke to the person in the mirror every single day! I told her just how strong, determined and beautiful she was! Every chance I had!!! I made this such a habit guess what happened?? I started to BELIEVE in myself! For decades I spent valuing myself by others words and actions. For decades I spent putting myself down, belittling myself… disgusted with the way I looked and felt. On January 14, I told myself: That ENDS NOW! So, my routine every single day was to stand in front of the mirror and CHEER myself on! Until it SUNK IN! And it did!!! My fear was gone! Because you see, it’s just not about the NUMBER on the SCALE… it’s about the LOVE we need for OURSELVES from ourselves! Make sense? With practice anything is possible! I practiced to LOVE ME! I gave myself the permission I needed to put ME FIRST, to LOVE ME, to CARE FOR ME! And that’s what I practiced every single day and still do! I have lost a total of 128.9 pounds way below my GOAL. I lost more then I weigh!! Life is a journey, this way of eating is my journey, and I AM WORTH IT aren’t YOU?!

Before I begin telling you the story of my weight gain and weight loss, I wanted to share something that happened to me at the early age of 18.

I was rushed to the hospital with a very bad headache and numbness on my right side. While at the hospital I became completely paralyzed on my right side. I spent several months being poked and prodded. My doctor sent for a neurosurgeon from Yale New Haven hospital. I will never forget the look on my parents faces when they both told them I would never walk again. I remember telling those doctors that they were wrong!!

“You don’t know me!” I exclaimed, I cried as I told them this…

They had found a spot on the left side of my brain that was causing the paralysis on my right side. After months of testing and procedures I was sent home in a wheel chair. Months of physical therapy, medications but never giving up hope, I made my Doctor a promise. I told him I’ll walk again before this year is over! I remember him smiling and nodding saying, “I believe you and in my stubbornness, you could do anything!” Fast forward 8 months later. I was walking with a walker still dragging my right leg pretty bad but still I was walking!!! This wouldn’t beat me!!! Fast forward another 6 months and I walked into my doctors office with a cane! I had done it, at this point still dragging my foot but walking!! By the age of 20 I was able to walk with no issues. During this time is when the weight started piling on… I had overcome so much already but couldn’t control the weight.

I got married 2 months before my 21 birthday. During my first pregnancy I gained 55 pounds. A year later I had a miscarriage and piled on some more pounds. Eight years later I gave birth to my second child and gained only 17 pounds… only! The only medical issue I had was I had DVT (deep vein thrombosis), very low blood pressure, and I was anemic. Thank goodness I didn’t end up with diabetes.

Over the years I tried every single diet you could think of with very little success. I did Nutri System, Weight Watchers, Slim Fast, diet pills, shakes. You name it, I tried it! The most I lost was 60 pounds and eventually would gain it all back plus more.

I remarried in August of 2018 to an amazing man, who loved me when I was heavy. I felt defeated and I was tired all the time. Fast forward to the very beginning of January 2019. I was devastated, disappointed, and disgusted with myself. As I sat on the sofa I came across a video called “A Postcard from Yellowstone” and I heard the words this tiny woman spoke. It was as if she was speaking only to me!!! She said she was half her size and she no longer qualified for her weight loss surgery. I remember listening to every single word. Soaking all this information in. I went and looked for her Eat Like a Bear Group on Facebook and joined!!

The next day I stood in front of the mirror and had a heart to heart with myself — actually looking at myself. I told myself if Amanda can do this, so can you!!! I told myself many things that day. On January 11, 2019, I started my 3 day water fast to cleanse out my system. I hadn’t weighed and, to be honest, I was afraid too. Then the day came January 14, 2019 I took my before pictures and stepped on the scale. To my shock the number that stared back at me was 255.9! How, why, did I let myself get here?! I was beside myself. But, I made a promise to myself that day, a commitment to myself! I spoke kindly to myself and cheered myself on every single day! I took those pictures and posted in the group. I spent hours reading posts and seeing all the videos from Amanda. I bought a journal and started my journey! Amanda had a book for sale and for less than a pack of cigarettes ($9.95) I purchased the book. I read it and read it gain. I took her plan and tweaked it for ME!

This is what I would do: I ate Tuesday, Wednesday, Thursday, and Friday at 12/12:30 and Saturdays I would eat with my husband at 2pm. From 3 o’clock on Saturday I would do my extended fast till Tuesday at 12/12:30! The plan was made and I would stay focused and strict. Amanda eventually put out another book called “The RIDICULOUSLY Big Salad”. I didn’t even think twice I purchased the book that would be known as “my second bible.” I now owned both books and planned on reading them over and over until all she wrote had been carved in my brain.

My schedule was simple: I ate the Ridiculously Big Salad Tuesday, Wednesday, Thursday, and Friday. Saturday I would do a keto meal with a side salad. I did a 23/1 eating window, 1000-1100 calories per day (when I ate), under 20 carbs, and NO CHEATING, no fat bombs… I stayed strict and focused. I was doing this for me! I was worth this journey and I wouldn’t sabotage it or myself!

I’m so much healthier now, able to hike, run. I went from wearing 2 and 3X’s to wearing a size small shirt and a size 4 jeans which are now loose!! I have never in my entire teenage and adult life have I ever worn those sizes!

Am I proud? You better believe I am. I worked hard stayed focused continued to do my extended fast and my skin is healing!!! It’s healing itself!

This group ELAB on Facebook is just your regular Facebook group! It’s a family! A Bear family of inspiration and success! I couldn’t be prouder of being apart of such amazing group of people. I owe much of my success to Amanda Rose and her Yellowstone video and this amazing group of hers. In all the diets I had tried there was always one major thing missing, inspiration/encouragement from people who only knew each other in a GROUP! We became family supporting and encouraging each other. I believe that anyone of us can do this! Because I did!

Now I have a question for you… aren’t you WORTH this Journey? Aren’t you worth a healthier version of yourself? If the answer is YES then come find us here at ELAB GROUP on Facebook and get ready for the ride of your life!!! This “family” I belong to has continued to inspire me and I will continue to inspire as many as I can to be a better version of themselves! Now grab a hold of your bootstraps and let’s do this!