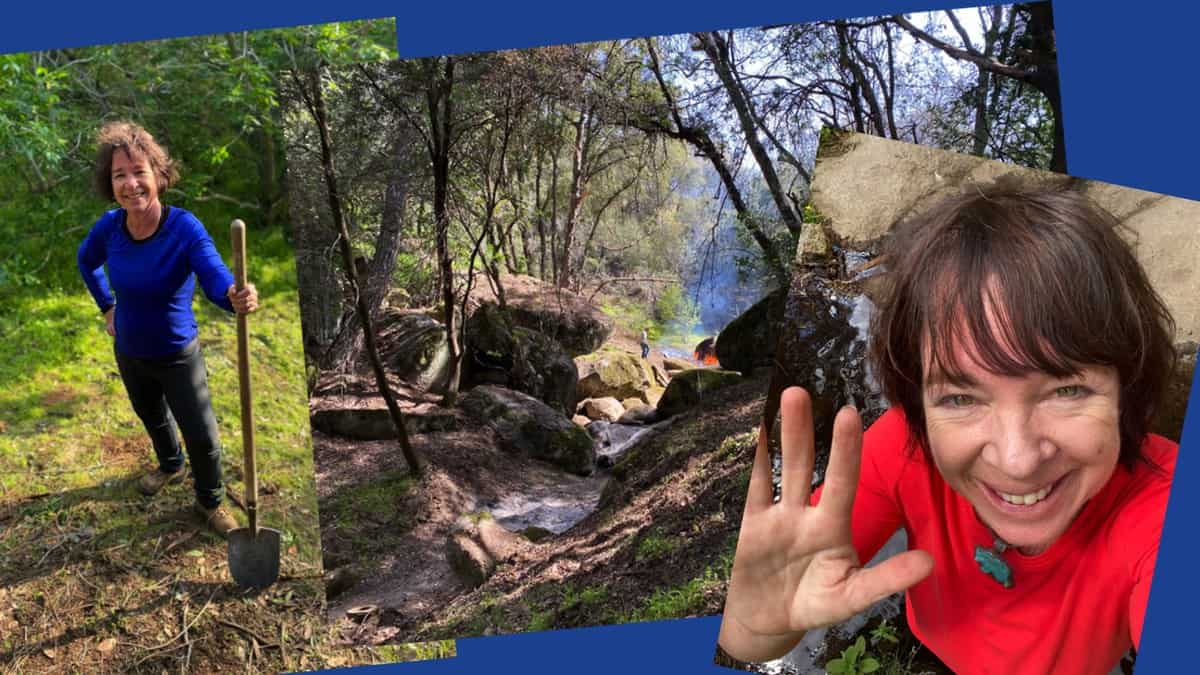 “Fat Mama Creek” is the seasonal creek on our property, in highly inaccessible terrain. The name is an unofficial one, not logged on any legal maps.

Way back about eight years ago, as my sons and I explored it together, we realized that the creek was too small to have an official name. We named it “Fat Mama Creek.”

It was the fall of 2017 through spring 2018 that I would end up a “half my size” weight loss case and then some months later, the unexpected leader of the Eat Like a Bear weight loss community that you find here on this website. Prior to 2018, I had always been fat.

Through the years since we named Fat Mama Creek, I had completely forgotten the little creek’s name until my son Frederick guided me down there in the winter of 2021.

He exclaimed: “Look at the trail I cut to ‘Fat Mama Creek!’”

The moment is memorialized on YouTube, where I am following him and his project, and obviously emotional about the bigger pitch he is making: “Let’s develop this area so we can get down and use it.” (Here’s the time stamp where he’s touring me through the project and turns around and says, “Don’t cry!”)

Way back in 2013 when we named the creek, it was my deep desire to develop the area, but there was no real path to do so: The terrain was far too steep for me and I had no one else on board with my vision.

By the winter of 2021 things had turned around completely: I was physically a completely different person and I had a grown son with a vision for the project.

Also captured in the YouTube video is my deeper exploration of the area, in particular the large mossy rocks that line the small canyon. I have nearly lusted after similar little micro-climates on friends’ properties and even wondered if I should try to buy the properties some day, just for those big rocks.

As it turns out, I’ve had those big rocks all along and I just had not realized it.

In an emotional point in the video, I describe that discovery of the rocks and compare it to what so many of us have discovered with the weight loss: We had it all along, we just didn’t know it.

(That emotional part is right here.)

It’s easy to get caught up in the shame of obesity, but here on the other side, I find no shame in myself in the fall of 2017.

I have a “before” photo lying on a couch looking most definitely chunky. When people see the photo, they assume I feel shame over it.

In fact, I consider the fall of 2017 the greatest time in my life.

It is then that I was deep in the act of combating my own self-doubt and second-guessing.

It was on that couch that I found my way here.

No, I do not intend to change the name of Fat Mama Creek.

The creek was named after the “me” who got me here.